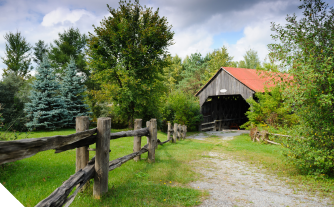 For some of us, Cookshire-Eaton is a slice of paradise: from Johnville to Bulwer, Eaton Corner to Sawyerville, and Birchton to Cookshire, the municipality is a source of inspiration.

Through its richness, cultural diversity, environment, and potential for achievement, the Town is geared towards the future: a perfect place to prosper.

The community plays a major role, benefiting the population from both individual and group perspectives and stimulating residents to get involved on an economic, community, and cultural level.

After completing his studies in art and design in his hometown of Winnipeg, Manitoba, Robert migrated to Montreal where he worked as an illustrator for the University of Montreal’s Research Department in Neurology (Neurosciences Group).

He was fascinated by the way that glass could be heated and shaped in the laboratories. From there, he decided to end his career in Montreal and move to the Eastern Townships to become a glass artist.

He studied glass forming at Sheridan College in Toronto, molded glass at Espace Verre in Montreal, and glass painting in New York with the late Albinis Elskus, a glass figure painter.

Robert then opened a studio where he restored figurative stained glass from all over the Eastern Townships and Quebec. He also designed and produced personalized stained glass for commercial and residential settings.

Heating and forming glass caught his attention and, with the help of different government grants, he perfected his skills and became co-founder of Surface Design. The business specializes in the design and production of contemporary furniture and accessories using glass, granite, and metal that is sold across Canada and the United States.

Today Robert lives in Cookshire-Eaton where he continues to produce sculptures and functional objects.

Born in Cookshire, I moved to the edge of the Sawyerville district at the age of five where I grew up to the rhythm of work based on the seasons. My childhood was steeped in many different agricultural activities, such as haying, plowing, and looking after the horses.

A few years later, I moved to a range in this area with my spouse and we built a house out of stones and wood. From this marriage, Marie-Ailes and Kloé came into this world. What a lovely gift!

I have been working at the Dairy and Swine Research and Development Centre in the Lennoxville area for nearly 30 years and, for the past few months, it has been my pleasure to contribute to the development of the Eaton Corner Museum.

The project to develop a community garden in Sawyerville is very dear to my heart and gives me the desire to become even more involved in my community.